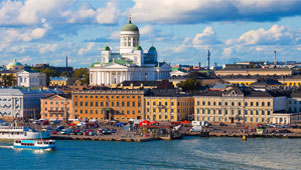 From June 12 till 15 BMT team took part in one of the most significant events in Obstetrics and Gynecology in Europe - NFOG 2016 which took place in Helsinki, Finland.

Among more than 800 participants of the congress where best specialists in the field not only from Scandinavian countries.

And we are proud to announce that our new optical colposcope ALScope which was presented on our stand was highly estimated by gynecologists from leading European hospitals and universities.

Thank you for visiting our booth and see you again!


NEWS
MEDICA 2021, GERMANY, MESSE DUSSELDORF, HALL 11/D41
The international MEDICA exhibition has been held annually since 1969 and is the world's largest forum in the field of medicine and healthcare. Biomedicinos Technika regular participant of MEDICA tradefair show.
You are welcome to visit our booth at MEDICA 2021 from 15 to 18 November, hall 11 / D41.
We will demonstrate modern versions of the ALScope-HD and SLV-101 HD colposcopes, as well as the new compact SLV-101 HDm video colposcope.
The SLV-101 HDm is particularly attractive for the private market as it is an affordable and ready-to-use solution that allows you to work even in the most confined spaces.
More >
New SLV-101 HDm launched
New SLV-101 HDm available!
Biomedicinos Technika presents SLV-101 HDm - compact version of SLV-101 video colposcope. Perfect picture quality in small size.
READY TO USE - Supplied assembled!
SMALL STAND – Suitable for any room!
REAL TIME video on PC via USB connection!
More >
Russian Health Care Week 2019
Biomedicinos Technika will demonstrate colposcopes SLV-101 and ALScope products at the "Russian Health Care Week 2019" show in Moscow.
You are welcome to visit the booth of our partners, LLC Sonomedica.
Booth 22D75 Pavilion no. 2.2.
Exhibition Dates: December 2-6, 2019
Venue: Expocentre Fairgrounds, Moscow
More >